Facts About Blood and Blood Types

Not all blood is alike.

How Blood Type Is Determined And Why You Need To Know

Blood types are determined by the presence or absence of certain antigens – substances that can trigger an immune response if they are foreign to the body.  Since some antigens can trigger a patient's immune system to attack the transfused blood, safe blood transfusions depend on careful blood typing and cross-matching. Do you know what blood type is safe for you if you need a transfusion?

Discover what blood types are compatible with yours.

Get our guide to find out.

There are four major blood groups determined by the presence or absence of two antigens, A and B, on the surface of red blood cells. In addition to the A and B antigens, there is a protein called the Rh factor, which can be either present (+) or absent (–), creating the 8 most common blood types (A+, A-,  B+, B-,  O+, O-,  AB+, AB-).

There are very specific ways in which blood types must be matched for a safe transfusion. The right blood transfusion can mean the difference between life and death. Use the interactive graphic below to learn more about matching blood types for transfusions.

There are more than 600 other known antigens, the presence or absence of which creates "rare blood types."  Certain blood types are unique to specific ethnic or racial groups. That’s why an African-American blood donation may be the best hope for the needs of patients with sickle cell disease, many of whom are of African descent. Learn about blood and diversity.

What Is A Universal Blood Donor?

Type O is routinely in short supply and in high demand by hospitals – both because it is the most common blood type and because type O negative blood is the universal blood type needed for emergency transfusions and for immune deficient infants.

Approximately 45 percent of Caucasians are type O (positive or negative), but 51 percent of African-Americans and 57 percent of Hispanics are type O. Minority and diverse populations, therefore, play a critical role in meeting the constant need for blood.

Nearly 16 million blood components are transfused each year in the U.S."
What is your blood type? Donate and find out.

What Is A Rare Blood Type?

How Is My Blood Type Determined?

It’s inherited. Like eye color, blood type is passed genetically from your parents. Whether your blood group is type A, B, AB or O is based on the blood types of your mother and father.

* Note: If you have questions about paternity testing or about blood group inheritance, your primary care physician should be able to provide you with an appropriate referral. Testing difficulties can cause exceptions to the above patterns. ABO blood typing is not sufficient to prove or disprove paternity or maternity. 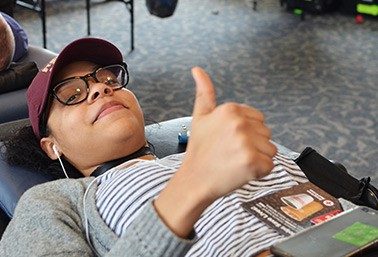 Ready to Help Save a Life?

Now that you know how your blood type can help recipients, please schedule an appointment to donate today.