When the need for blood turns personal: Julie’s story

When the need for blood turns personal: Julie’s story

Blood donations helped give Julie (back row, center) and her family more time with their father.

In the 18 years that Julie Houg has been an American Red Cross blood program leader in Wisconsin, many people have asked her why she volunteers to host blood drives. Until recently, she’d say it was just an easy way to give back and make sure that blood would be available for patients.

As it turns out, Julie just didn’t have a story yet.

Last spring, Julie’s 89-year-old father, Jerry Edgar, was struggling to recover after pneumonia and was incredibly weak. He was diagnosed with internal bleeding and was given two units of blood because his hemoglobin was low. He recovered and was able to discharge from the hospital to a rehabilitation center and then return home.

That wouldn’t be the last time Jerry would need blood. After two days at home, things went downhill fast. Jerry was experiencing weakness and numbness in his right leg. He was taken to the hospital by ambulance. Within the first few hours at the hospital, Jerry received two units of red blood cells.

As the hours passed, the situation became more dire. Surgery was needed – quickly – and it was likely that Jerry’s leg would be amputated because of damage caused by lack of blood circulation. Surgery would be dangerous – he was diagnosed with a recurrence of pneumonia and was still bleeding internally, though they couldn’t find the source of the bleeding. While waiting for the surgeon, Julie’s dad received his third unit of red blood cells. Watching him receive the blood hit Julie hard.

“When you see a recipient actually getting something that, for all I know, could have come from one of my drives, it just really hit me that this is an actual real thing,” Julie says. “You’re helping actual real people. But not just that person. You have to add in the family members and friends that are wanting that person to get better. So this not only affected my dad, but his seven children, his 11 grandchildren, his great-grandchild, his wife, his other family members. It’s a lot of people. Your blood drive can help that many people. I don’t know how that doesn’t affect you.”

Six hours after Jerry was taken for surgery, the surgeon told the family that she was able to do the least invasive procedure to get the best result. He had done well, he was very much alive, and she didn’t have to remove his leg. Jerry received another two units of blood during the surgery.

According to Julie, the surgeon made a specific point to say, “‘If it hadn’t been for the good tissue he had to work with and the blood that he got, I couldn’t have done the surgery.’”

Julie is forever grateful to the type A positive blood donors who helped her dad. Just days after they thought they would lose him, Jerry instead returned home and was able to see all seven of his children again. He passed away a few weeks shy of his 90th birthday. Julie says that, without blood donations, “That was two months we never would have had.” 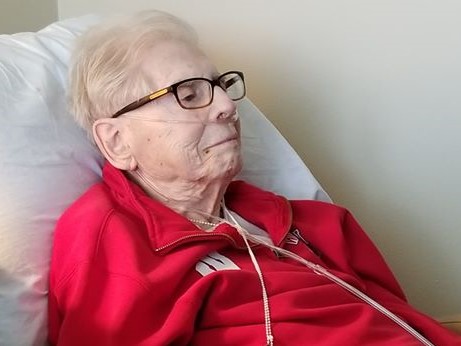 Transfusions helped give Jerry more time with his family.

Help ensure blood is available for patients in need: Host a blood drive

Because more than 80% of blood donations are made at blood drives hosted by volunteers, blood program leaders like Julie play a vital role in helping ensure a sufficient blood supply for patients in need.

Julie says hosting a blood drive is “so easy to do, and it’s so fun.” She has a committee and says they don’t just hold blood drives – they hold blood drive parties, building goodwill in their community and bringing people together around a central cause.