The Relentless Pursuit of Service

The Relentless Pursuit of Service 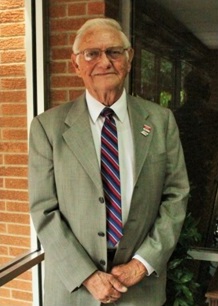 If one were to donate a pint of blood at an American Red Cross blood drive in Louisville, Ky., chances are they would encounter an outgoing, elderly gentleman wearing a decorated Red Cross vest and carrying a piece of paper with his story in his pocket.

This cordial man is James ‘Jack’ Smith, an 87-year-old Red Cross volunteer, blood recipient and blood drive coordinator of 32 years. Known for his constant community service, dedication as a mentor and reputation as a walking miracle, he has demonstrated a heart for helping people by sharing a lifetime of stories -- stories that most have not lived to tell.

Since he was 18-months-old, Jack has faced a number of severe physical challenges. From over 90 percent of his body being burned as a baby, to contracting polio at six-years-old and having to re-learn how to walk, Jack's early childhood began the course of multiple misfortunes regarding his health.

As a young man, a near death bout with hepatitis kept Jack in isolation for 10 months. Later, two mini-strokes rendered him unable to write with his right hand, and his left hand was later caught in a table saw and chain saw. In addition to having three heart surgeries, Jack had seven surgeries as a result of a calcified aneurysm in his artery, which also resulted in the removal of his stomach, part of his spleen, several ribs and part of his breast bone.

"I laugh and tell people the only thing they haven't operated on is my brain, and they can't find it," said Jack.

His sense of humor is not the only thing that has helped Jack overcome adversity. His passion for community service and blood donations stems from his strong faith in God and thankfulness for blood donors, both of whom he believes saved his life and gave him a mission.

"I'm so adamant about working the blood drives because I can't give blood," said Jack. "I never have been able to donate because of all of the things that have happened to me, but I know first-hand that I wouldn't be here if it weren’t for all these people giving blood."

Over the years, Jack has learned how important blood donations can be. He runs the risk of internal bleeding as a result of previous surgeries.  To date, he has received over 160 pints of blood and nearly 50 platelet transfusions.

"You never know at what point in life you're going to have to have blood and somebody has to give it," said Jack.

While all blood drives are significant to him, Jack coordinates drives with the Red Cross because it is an organization that is close to his heart. Since 1936, he has been directly impacted by the Red Cross’ mission to alleviate human suffering.

When his father passed away during the Great Depression, Red Cross Disaster Relief helped to provide his family with food and supplies. In 1983, Red Cross Service to Veterans assisted his family by bringing them together when he underwent a number of life-threatening surgeries.

In turn, he believes he has a lot to give, both to the Red Cross and the community he loves. Whether making 300 phone calls to promote a single blood drive, or approaching strangers to explain the importance of donating blood, Jack's relentlessness in promoting blood drive opportunities helps him to meet each drive’s donation goal about 98 percent of the time.

"He has never met a stranger," said the Rev. Bill Gressette, Jack’s pastor at Shively Baptist Church in Louisville. "Anybody who runs into him, whether at the supermarket check-out line or anywhere, he's going to mention blood drives and bring it to their attention."

"He's experienced more than most," said Gressette. "I know that with all that he's been through, God has, without a doubt, left him here for a purpose. And Jack embraces that purpose. He's not here just for himself."

While Jack may be approaching his 88th birthday in January, he does not appear to show any signs of stopping his humanitarian work.

Rhiannon Gilbert is a summer 2016 American Red Cross intern for River Valley biomedical communications. She is a junior journalism major at Middle Tennessee University (MTSU), with a passion for writing lifestyle content pertaining to public health and non-profit organizations.