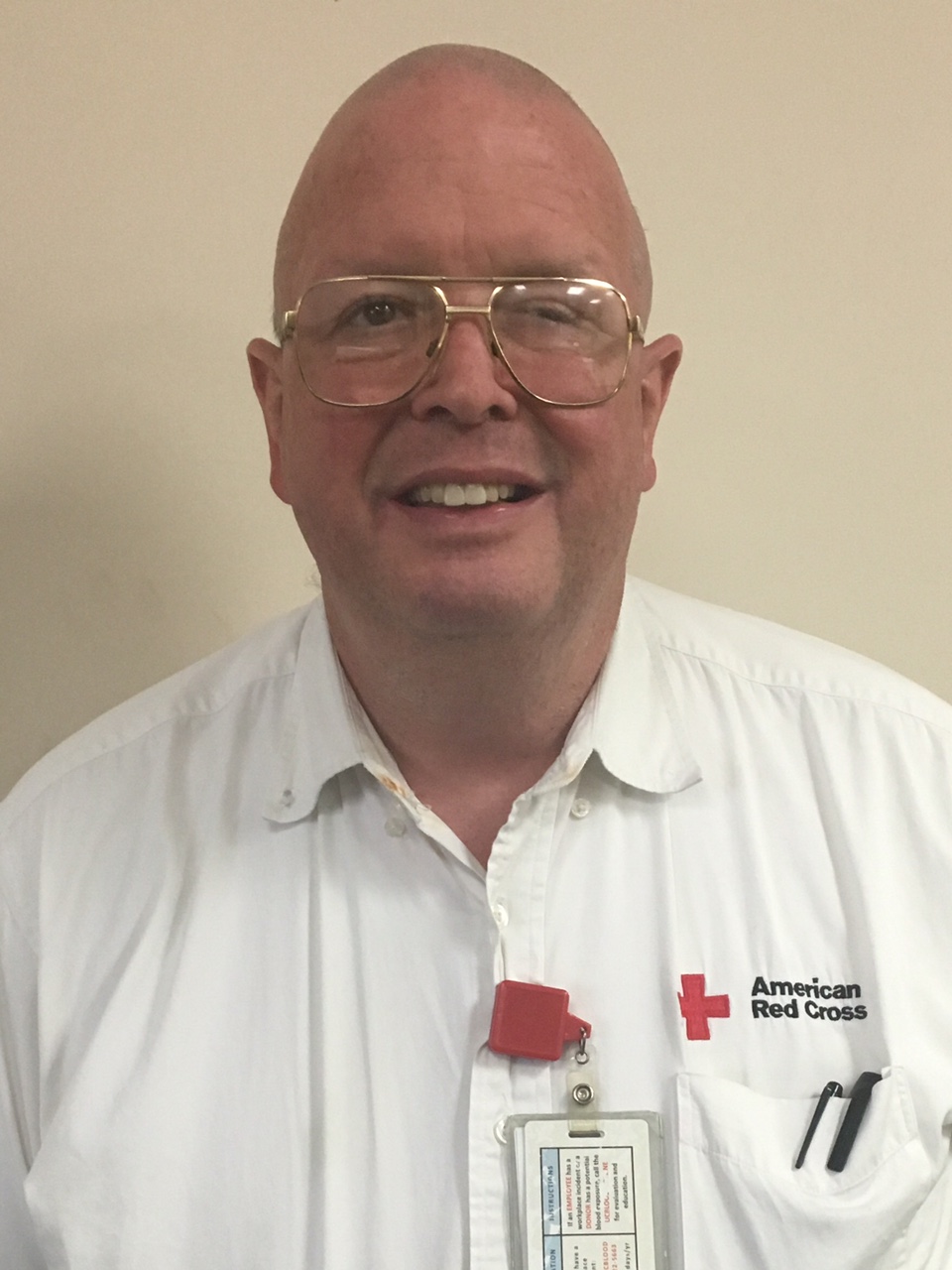 Dressed in a white, Red Cross, short-sleeve button down, he can be seen blissfully walking through the halls of countless Tennessee schools and the American Red Cross Donor Center in Nashville where he is simply known as “the blood guy”.

Nathan Baker, a 63-year-old retired Red Cross employee and volunteer, acquired the nickname over the years from students and colleagues who witnessed his unique passion for donating blood and educating others about its importance.

Visually impaired since birth, Nathan has managed to surpass any challenge he has had to face with his positivity and diligence.

“My philosophy is you do more than they want you to do,” said Nathan. “You exceed whatever their expectations are.”

Nathan’s philosophy is one that can be seen in every aspect of his Red Cross story –a story that began in 1972 when he first gave blood in the gymnasium basement of his alma mater, Trevecca Nazarene University in Nashville.

“I first started giving blood for a few reasons,” said Nathan. “One, you get out of class; two, they give you juice and cookies and three, I wanted to impress the women. When you’re a freshman that’s important . . . and no, it didn’t help.”

Although juice and cookies were his initial motivation, he continued to give blood at drives held at Trevecca and the Red Cross donor center to simply make a difference.

While donating blood in 1977, a nurse encouraged him to apply for a job with the Red Cross. After applying, he was informed there were no available positions. Despite this unfortunate news, he continued to give blood.

At his next donation, a nurse suggested that he apply to be a volunteer instead.

“They were a little anxious about that because I couldn’t read really well and I didn’t drive,” said Nathan. “But, they said, ‘he likes to talk,’ so they sent me down to donor resources where they did telemarketing.”

In telemarketing, Nathan was given the task of calling previous donors to ask them to donate again. On his first day, he was able to encourage 23 people to schedule an appointment to give blood. Eight weeks later, he was hired as a Red Cross employee.

“I owe 38 years, two months and eight days of employment to that nurse who said, ‘Well, if they didn’t hire you, you could work here for free,’ said Nathan.  “She was listening to me. I was unemployed and I needed a job.”

Nathan later became a representative in the blood donor recruitment department and a blood services educator. In these positions, he planned blood drives, recruited donors and gave presentations about blood donations to over 8,500 elementary, middle and high school classes.

“Nathan has a way of engaging people,” said Renee Jenkins, volunteer coordinator for the Red Cross Tennessee Valley Region. “That’s one reason I believe he is so good at giving presentations to the students. He can get down where they are and explain to them what the process is and how important it is. It’s not a slogan or a motto to him . . . it’s his life.”

In addition to working in blood services, Nathan also volunteered in Disaster Relief Services. After retiring in December 2015, he decided to continue volunteering with the organization.

As a donor, volunteer and former employee, Nathan has been on all sides of the Red Cross. He has a special appreciation for volunteers because of those who were willing to drive him to the schools where he gave his presentations.

“I’m not going to let volunteers fall through the cracks,” said Nathan. “Without Red Cross volunteers, there is no Red Cross.”

Nathan has recently been appointed as a Red Cross engagement officer in volunteer services, where he helps assign volunteers to roles within the organization. He believes that there is a place at the Red Cross for anyone who wants to donate their time and efforts.

Still an avid Red Cross blood donor, to date, Nathan has made over 540 life-saving donations, most of which were platelet donations. He plans to make his 600th donation at Red Cross national headquarters in Washington, DC.

Candace Whitman is a summer 2016 American Red Cross intern for Tennessee Valley biomedical communications. She is a junior Communications major at Maryville College with a passion for communicating information for a company or organization that helps others.